Chronic q fever from a sledge dog or seal, are you serious?

Q fever caused by a seal?! In the Netherlands, Q fever is mostly known in connection to goats. The epidemic between 2007 and 2011 had a huge impact on a lot of people who were infected, and at least 74 people were killed. However, that more animals can carry Q fever is fairly unknown. For example, goats don’t live in the east of Greenland. Neither do sheep or cows. Even raw milk, which might also cause Q fever, can’t be found in this part of Greenland. Even so, a patient with Q fever was discovered here.

Q fever in the middle of nowhere

In 2008, a patient, a 40 year old man from Isortoq in the east of Greenland, was diagnosed with endocarditis (an inflammation of the internal skin of the heart muscle and the heart valves). Because of this, the valves needed to be replaced. As part of the standard procedure, a sample of the valves was examined. The results showed that the endocarditis was caused by Q fever. 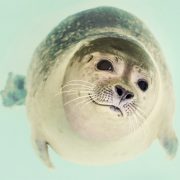 The patient has probably gotten Q fever in the Ammassalik area, which includes Isortoq. This part of Greenland is only accessible by helicopter or boat during the summer. During the winter, the inhabitants use dog sleds or snowmobiles. How can someone in the middle of nowhere get Q fever?

Because raw milk is unavailable, the patient has likely contracted Q fever from animals. However, the closest sheep, horses and musk oxen are over 1,000 kilometers away.

In order to maintain an infectious disease, a group animals of a certain size is needed. The only animals in this part of Greenland that fit this bill are sledge dogs and seals. It is highly likely that the patient contracted Q fever from one of these two species.

It is often thought that Q fever is carried by infected sheep and goats. However, as this research shows, other species might also carry this disease. The Coxiella bacteria, which causes Q fever, for example, has also been found in reindeers, kangaroos and camels. In the Netherlands, deer and dairy cows are familiar example of species that might carry the Coxiella bacteria. Fortunately, we pasteurize milk. This means that Q fever is still a real risk for certain professions and hobbies like hunting, even though the epidemic has passed.

Innatoss is of the opinion that the risk, for, for example, agricultural students should be researched even better. Besides understanding the risks, a Q fever vaccine should contribute to protection against this disease. That is why, Innatoss is part of the Q-vaxCelerate project, an American project led by the famous Massachusetts General Hospital, in order to develop a better vaccine.