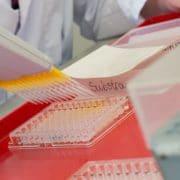 Research done by the Tulane University (New Orleans, LO, USA) supports the existence of persistent Lyme infections in rhesus monkeys. In this study, ten rhesus monkeys were infected with the Borrelia bacteria, which might cause Lyme disease. After 16 weeks, five out of the ten monkeys were treated with the recommended amount of doxycycline. This research shows that even after recommended doxycycline treatment, traces of the Borrelia bacteria could be found the monkeys’ tissue.

The researchers concluded that the Borrelia bacteria could by-pass the immune system, that when treatment is started in a late stage of the infection, the bacteria can survive a doxycycline treatment and can damage vital organs. Because low numbers of the bacteria remain, it is possible that a persistent infection might be the cause of a lot of aspecific symptoms without an infection being detected. This research shows that it is crucial to start treatment as soon as possible, before the bacteria spreads throughout the body. This again emphasizes the necessity to discover a Lyme infection early.

The researchers furthermore showed that the persistent presence of the Borrelia bacteria might not be reflected in the antibody production of an individual monkey. During the research, antibodies were measured on several different occasions. The antibodies of the monkey that were treated with antibiotics declined, but this was not always the case. However, some of the antibodies of the untreated monkeys also showed a decline. At Innatoss, we also see this individual variation in humans who have an EM or go through a seroconversion.

At Innatoss, we always say: “Mice are not men.” The upside is that this research was done on monkeys, which makes the translation to humans much surer as a study done on mice. Perhaps, this model can a be used to search in blood for biomarkers of an active infection that are relevant for humans.

Chronic q fever from a sledge dog or seal, are you serious?
Scroll to top